LOS ANGELES - Pictures and video of the Rockefeller Center Christmas Tree have lit up social media — but for all of the wrong reasons.

The 75-foot-tall holiday fir tree arrived from Oneonta, New York on Saturday and appeared droopy, misshapen and in disarray. 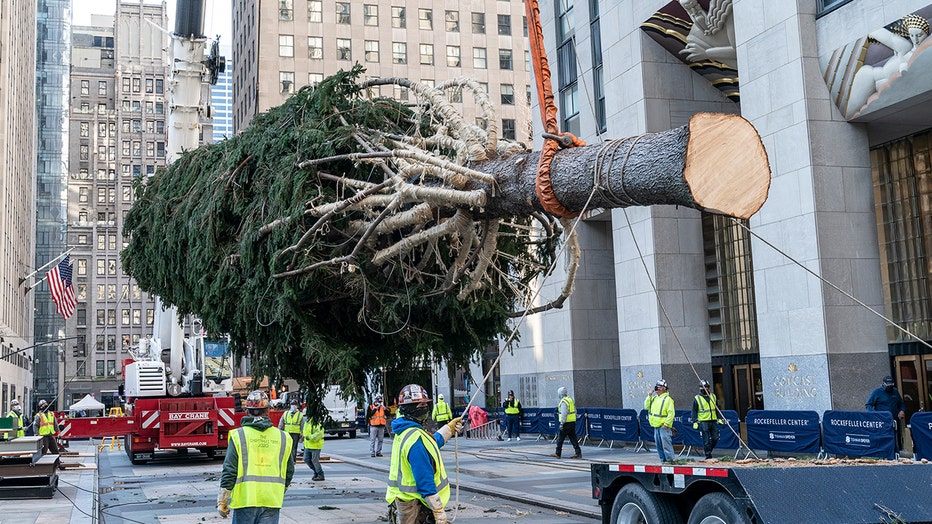 A 75-foot Christmas Tree from Oneonta is being installation at the Rockefeller Plaza.

The tree was later lifted into its spot by a crane, which led to the wave of online comments.

“The Christmas tree for Rockefeller center looks like they forgot there was an assignment due and this was the best they could find,” one user wrote.

“What the heck is wrong with the tree??? This is what it looked like before it was cut...and now. Gulp!,” another commenter wrote on Twitter.

Other social media users pointed to the year 2020 as an obvious reason for the tree’s appearance.

"In true 2020 form, the Rockefeller Center Christmas tree looks like it tried to cut its own hair," pianist Chris Ryan tweeted with a picture of the tree.

The Rockefeller Center was quick to fire back, writing a cheeky response on Twitter.

“Wow, you all must look great right after a two-day drive, huh? Just wait until I get my lights on,” the Rockefeller Center quipped. “See you on December 2!”

The tree will be decorated over the coming weeks and its more than 5 miles of lights will be illuminated at a ceremony at 7 p.m. ET on Dec. 2. The Rockefeller Center Christmas Tree arrives at Rockefeller Plaza and is craned into place on November 14, 2020 in New York City.

"The tree is fully wrapped, branch by branch, for a couple of weeks before it is cut and driven into the city on a flatbed truck," a spokesperson for Rockefeller Center explained to the Today Show. "The journey took two days this year."

No in-person spectators will be allowed at the tree lighting this year due to the coronavirus pandemic.

Tishman Speyer, the company that owns Rockefeller Center, told the Associated Press it's “especially proud to keep up the tree tradition this year. The pandemic has spurred the cancellation of some other New York holiday customs, such as the Radio City Christmas Spectacular.”Hopefully, the Rockefeller Center crew can spruce this Christmas tree up before the lighting on Dec. 2.